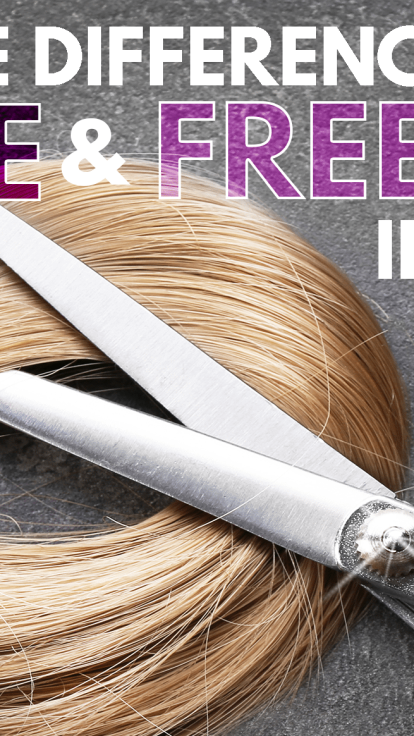 As such, it’s easy to assume that “freelance” and “mobile” mean the same thing, but in fact, they are two very different things. Just because someone is operating as a freelancer it does not mean that they are working on a mobile basis, and vice versa.

What does “freelance” mean?

The term “freelancer” was coined around 200 years ago and originally meant a mercenary. It was quite literally someone who had a lance and was free to fight for you as long as you were prepared to pay. Over the years the term has evolved to mean an independent, self-employed person who provides a service.

Because a freelance is working on their own, it means that having business premises isn’t usually viable, so a freelance beautician or hairdresser will tend to work on a mobile basis. They will usually be travelling to their clients’ premises to provide their services rather than providing those services at their own premises.

However, some freelance beauticians and hairdressers will rent a seat in someone else’s salon, either for a flat weekly or monthly fee, or for a share of their income. Just because someone is operating on a freelance basis, it doesn’t mean that they have to work on a mobile basis.

It also means they don’t get the perks that a salon employee would get, such as sick pay or holiday pay, and they have to pay for their own equipment.

What does “mobile” mean?

As the name suggests, “mobile” means that the work can be carried out anywhere. The service provider is going to the client to provide the service rather than expecting the client to come to them.

The employees of a company supplying hairdressers and make-up artists to photographers and film production companies, for instance, would probably be spending a lot of time in studios and on location rather than in their own salon. Similarly, some companies send their employees to work in nursing homes on a regular basis.

Until they’ve built up a decent client base and have started to get word-of-mouth recommendations, a mobile beautician or hairdresser will have to do a lot of advertising because they don’t have a salon to act as a shop front and draw people into their business.

Should I be a freelancer?

As with all professions, there a pros and cons with being a freelancer.

When you’re a freelancer, you can’t guarantee you’ll earn anything each week, whereas when you’re working for someone else in their salon, you get paid the same amount each week, even if you’ve just been sat down drinking tea.

When you’re a freelancer, you need to deal with an accountant, arrange your own insurance and advertise your services. As an employee, your employer takes care off all of the admin and you just have to concentrate on pampering your clients.

When you’re a freelancer you don’t get sick pay, so you have to pay for personal accident & sickness insurance. Neither do you get holiday pay when you take time off.

But although there are downsides to being a freelancer, many people love the freedom that comes with not having to answer to a boss.

They love the fact that they can make real decisions and don’t just have to do whatever their boss tells them to do.

Being a freelancer isn’t for everyone. But for some people, it’s the only way to work.

The Latest From Our Knowledge Hub

Marketing hints and tips for your business

DNAs: Our complete guide to preventing dreaded no-shows (And what to do when it does happen!)

Why is it important to give aftercare advice?

The Patch Test Dilemma: Our Tips & Tricks To Help You Turn Patch Testing Into A Lucrative Marketing Opportunity

So easy to get a quote, read the info and buy a policy.

Purchased on behalf of my daughter so needed clear and easy instruction to complete the form....tick!

Very good, and easy to fill out!

Thank you for your feedback!

This website is intended for customers based in the UK and is therefore subject to the UK regulatory regime(s) © Copyright 2020 Salon Gold | Salon Gold, Holistic Gold, Counselling Gold, Fitness Gold and Henry Seymour & Co. are trading names of Barkdene Limited which is authorised and regulated by the Financial Conduct Authority (FRN 303965) for our insurance distribution and credit broking activities. Barkdene Limited is a credit broker not a lender. You can check this on the Financial Services register https://register.fca.org.uk/. Registered in England No 1842617. Registered Office – Chancery House, St Nicholas Way, Sutton, Surrey, SM1 1JB. All rights reserved.
The Hub | Hair, Beauty, Holistics

Are you joining in on the fun?

What are you waiting for? Join us now!